Online Degrees.com, October, 2011: How to Network the Tailgate Party

FOX Business, February 2012: Is Self-Publishing in Your Marketing Plan?

ProfNet Connect, March 7 2012: 8 Ways to Project Confidence in the Workplace

Mint.com, April 2012: 5 Things Grads Need to Do Before They Job Hunt

Business Insider, April 2012: Take Advantage of These 5 Trends and Become the Boss of Tomorrow’s Workplace

Inside Chappaqua, April 2012: Don’t Hook Up With the Dude in the Next Cube: 200+ Career Secrets for 20-Somethings

HerCampus.com, May 2012: Book Review: Don’t Hook Up With the Dude in the Next Cube

The Metropolitan, May 2012: Book Review: Don’t Hook Up With the Dude in the Next Cube

Radio interview with Pwrtalk.com , May 2012: Remaining on the Job Once You’ve Got One

PennLive.com, May 2012: College Grads: Keep These Tips in Mind When Heading Into the Workforce

Today Money, MSNBC.com, June 2012: The Perils of Hooking Up with Your Boss

MetroNews Canada, July 2012: Advice on the Good and Bad of Office Romances

Toronto Star, August 2012: The Dos and Don’ts of Office Romances

Praise for Don’t Hook Up With the Dude in the Next Cube!

“Don’t Hook Up With the Dude in the Next Cube offers 205 bold and sassy career-saving tips that all 20 somethings should follow. If you want to get and keep that dream job, do yourself a favor and get this book!”

“Nancy and Lindsay certainly have a handle on how to make it in today’s world.  This is the kind of real-deal information that every graduate should know.  If you follow their advice, you’ll be rocking your career in no time.”

-John Battaglia, Jr., author of The Rock Star in You

“The authors of this upbeat, hip book are clever and smart, and share outstanding rules and guidelines necessary for work success. The book makes a great gift for a college grad or new professional who needs to know about the world of work — so she makes fewer mistakes than we did!”

“This book made me think back to the days when I worked as an executive recruiter, and of the many employees hired (and fired!) who needed this guide in the early years of their career. Chapters 6 and 7 are especially important!”

“I’m not a female 20-something, far from it, but I truly enjoyed reading this book. I found the career secrets useful even for a 40-year-old male entrepreneur. What comes through in these pages are the savvy words of two courageous women that really care for young women starting off in their careers. Keep this book, and the authors close, and you’ll be the boss lady soon enough.”

- Eduardo Sciammarella, CEO & Co-founder GatherGreen.com. Eduardo is a true visionary with three startups under his belt and over forty patents.

“The breadth of organization and business challenges Nancy met so successfully as my Chief of Staff prepared her well for writing this book with Lindsay on how women can really achieve in the Business World.” 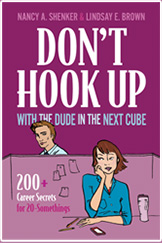 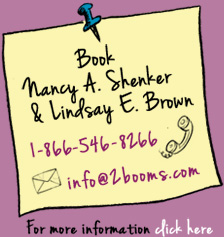 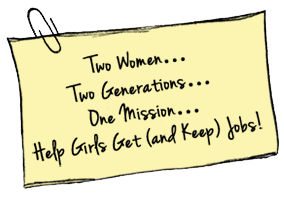